Are ionic minerals or colloidal minerals better? What do those terms mean anyway? Marketers of both types of products make claims that they are “more absorbable” than other mineral forms. But are they really? In this article, we examine definitions, how well the claims stack up, and what is just hype. This article begins each section with definitions, followed by discussion in conversational terms.

Minerals and Trace Minerals: A Clarification of Definitions

Sometimes also called major minerals are those which the body requires more than 100 milligrams of per day for proper maintenance of health.

Also called trace elements, are those minerals which the body requires less than 100 milligrams of per day.

An atom or group of atoms that are inherently either positively or negatively charged due to either additional or missing electron(s). This charge causes the ions to interact, attracting or repelling each other in a search for another ion to join with or to give up an electron in order to make the charge neutral1, 2.

Of, containing, or relating to an ion or ions.

A substance whose molecules split into individual ions when dissolved, thus allowing it to conduct electrical energies1.

The body uses the movement of ions through these fluids and across cell membranes. It is fascinating to study because the ions conduct electricity throughout the body, and the ions regulate the body’s acid-base balance while also maintaining its water balance. In lay terms, ions tell a cell whether to let water into the cell membrane. This is why electrolyte salts are so important for hydration. Without electrolytes, water simply doesn’t get inside the cell.

A suspension of tiny non-soluble mineral and trace mineral particles in water. Most colloidal minerals are held in suspension by their tiny size and/or a static electrical charge.

Click here to read a definition and discussion of colloidal minerals on WebMD.

We liked this background info from the website, “Science Clarified:”

Colloids are common in everyday life. Some examples include: whipped cream, mayonnaise, milk, butter, gelatin, jelly, muddy water, plaster, colored glass, and paper.  Colloids can be made from almost any combination of gas, liquid, and solid. The particles of which the colloid is made are called the dispersed material. Any colloid consisting of a solid dispersed in a gas is called a smoke. A liquid dispersed in a gas is referred to as a fog.

Regarding hype around whether colloidal minerals are better than ionic, one might ask, is mud inherently healthier for a human to eat than, say, sea water?

Many colloidal minerals claim to be organic due to the fact that they come from prehistoric mineral deposits such as humic shale and that some of the minerals are bound to carbon. We find it interesting that by this definition of organic, coal and many petroleum products are also organic. Any discussion about a mineral being “organic” is a distraction. In food products, “organic” has come to mean lacking pesticides and pollutants. Hence, someone might think of “organic” as being healthier, but from a chemistry definition, minerals are inherently “inorganic.” A person might consume minerals that are found in, say, a vegetable, (hence the source is organic) but that does not mean the minerals themselves are organic. It just means the plant took those minerals up from the soil.

In addition to comparing the definitions of the two forms, one important comparison is size. Here we use magnesium as an example to illustrate this point.

The size of a magnesium ion is 1 X 10-6 microns. Compare this with the average colloid particle, which is 1 micron. If we were to make a model of a magnesium ion with a one millimeter (mm) radius (about the size of a very small BB—ball bearing), and then if we made a comparable model of a colloid to the same scale, then the colloid model would have to have a radius of one kilometer (km).

Which one would you imagine the body could most easily absorb? Likely, the stomach acid would be able to help dissolve some of the colloid, but ions are already broken down into their smallest atomic size. They also already have a natural charge, that aids in digestion. This makes them available for immediate assimilation.

Related article: Magnesium Deficiency – Needs for Magnesium Not Met in Most People

Colloidal vs. Ionic – Fact or Fiction

The following is an excerpt from a lecture presentation delivered by Parris Kidd, Ph.D. at the Mineral Resources International facility on November 5, 1996.

Currently, there is a lot of controversy about colloids. The dictionary definition of a colloid is as follows: “Aggregates of atoms or molecules in a finely divided state dispersed in a gaseous, liquid or solid medium and resisting sedimentation, diffusion and filtration.” The clear thrust of this meaning, then, is that colloids are stable aggregates, that is, they are super atomic. They are aggregates of two atoms or more so that even if the colloid is in the ionic form, it still has two or more ions at a time. We don’t need colloids for that. All we have to find is good, affordable ionic sources of minerals, and we get single ions. So, rather than having to deal with colloids, which can be two or fifty, or even 200 at a time, we have just one mineral at a time. That is what the body is looking for.

There’s absolutely nothing special about colloids. But there are lots of things about colloids that aren’t special. You can almost predict that aggregates of ions are not going to be absorbed. There are also no studies to be found. I can not find one study in the literature on colloid absorption or metabolism, and nothing to do with colloid digestion, absorption or metabolism. The reason for that is that colloids were never meant to be a dietary supplement.

A person might consume minerals that are found in, say, a vegetable, (hence the source is organic) but that does not mean the minerals themselves are organic. It just means the plant took those minerals up from the soil.

Colloids were a fad in medicine between the early 1900’s until about 1936. Certain physicians found that if they could get silver into a state of suspension they could use it as an antibiotic. This was before conventional antibiotics were known and that’s what colloids were used for. When more efficient antibiotics showed up about 1935-36, the colloidal literature falls off a precipice. There were a few scientific papers through the early 30s but there are no papers beyond 1936. So, colloids were a passing interest. However, it is still debatable how efficient colloids are as antibiotics. It appears that colloids are not absorbed well and they’re likely going to prove toxic if taken on a daily basis.

There are some ridiculous claims out there regarding colloidal minerals. One claim is that colloidal minerals are 98 percent absorbed. This claim is not supported whatsoever. It is a bold-faced lie. Having looked through the literature myself back to 1905, I cannot find one shred of evidence that this was the case. The people who make this claim have given two reasons.

The first claim is that the colloid particles are so small they are readily absorbed. Colloids are not as small as ions. It is unlikely that as aggregates they are going to be readily absorbed because the transporter uptake proteins are looking for single ions. People who claim that colloids are 98 percent absorbed and that ionized minerals are only 8 to 10 percent absorbed even in the most healthy people either haven’t looked at the literature or are purposely misrepresenting the literature. The literature quite clearly shows the ionic form [absorption rate] ranges from 20 to 90 percent depending on how hungry their system is for the mineral at that time. So the absorption efficiency goes up when the body is hungry for the minerals and goes down when the body has enough of the mineral.

Secondly, these people claim that their minerals carry a negative charge and that the gut is positively charged; therefore, the two attract each other. Even a high school chemistry text book will tell you the gut is negatively charged. It does not carry a positive charge. Therefore, it is simply ridiculous to make that kind of assertion about colloids.

MRI is a family-owned and operated business (well into its third generation) and is a source of pride for us. Our mission is to improve global well-being through mineral nutrition. 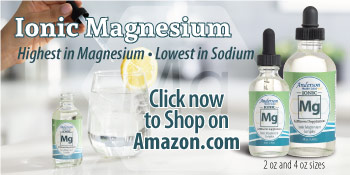 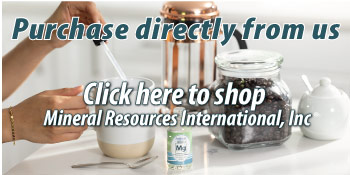